When the startup hub SUP46 started using Weld, it wasn’t the typical Weld use case. They already had a WordPress website, but they had difficulties managing the Partners page*. The solution: embedding a Weld website within their existing site! 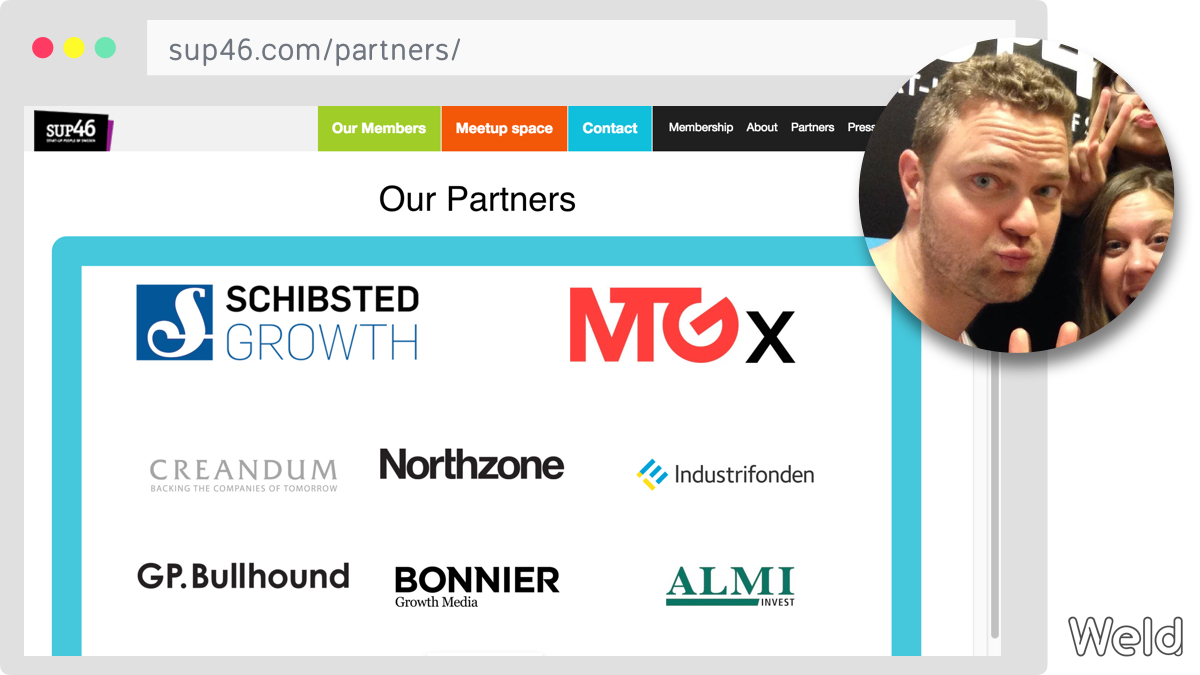 Tell us about SUP46 and yourself – what do you do?

SUP46 is a member-based community, home to Sweden’s next startup stars. It is also an open meeting place for the whole startup scene.

I’m the Service Manager, meaning I make sure the basics of running the place are covered. This includes making sure the web page is up and running and kept up to date.

Michael with other members of the SUP46 team

What is the background of the SUP46 Partners website and why did you pick Weld for the project?

We did the classic startup mistake in building our web page – we bought a website but not continuous support for it. So as more material was added the constraints became apparent – I could only fit so many partner logos into one page as I didn’t know how to make changes to the templates. Also it was time consuming – I had to skip back and forth in WordPress to change logo sizes and placement. And one thing about logos is that even if two logos are identically in pixel width one might “feel” bigger than the other which made our CEO wish for incremental changes to be made.

All of a sudden I could pretty much drag-and-drop the logos, which has been a huge time-saver.

Also, I could size and resize the logos freely, where I before had to settle for preset sizes. It was a bit tricky at first, a bit beta-esque (this was in spring 2015 before the official launch), but even when I had to do mini-hacks in Weld it was still a breeze in comparison to what I had been doing.

I discovered that I preferred making one version for mobile and one for desktop and keep them separated. Trying to make changes to both versions at the same time just had me confused. Also, I had to remember to make a picture placeholder before uploading a logo, and had to locate the file on my computer and upload it, but anything once put into Weld then became truly drag-and-droppable and resizable.

Lastly I had to write all the URL’s by hand rather than copy/paste, and then found it was easier to just start from scratch on a link rather than try to edit it, but even with all of this it was more than worth it. I spent one hour building the whole page. I could get embed/iframe code for my Weld page and our homepage guy could just paste it in whatever he had built. It was a near perfect quickfix.

*Note: Since the writing of this article, SUP46 have updated their website and removed the old Partners page. We have kept this article because it’s a great example of how to embed a Weld page inside WordPress (or any CMS) for that matter.